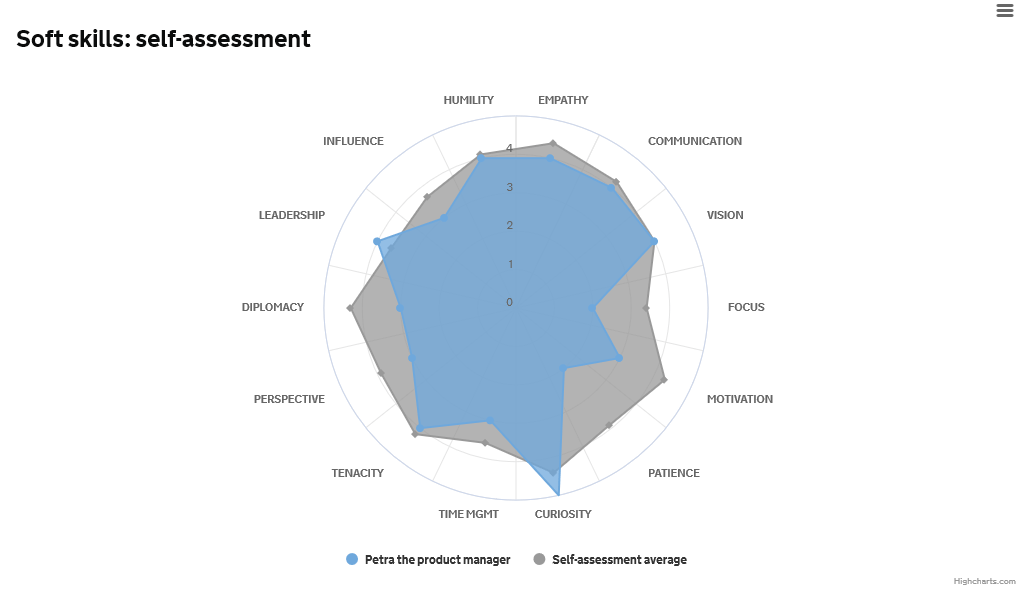 62: How to measure product manager performance

Early on in my blog, I wrote one of my most popular posts – 4 key ways to spot a successful product manager – about measuring the performance of product managers. The problem is that a lot – and I mean a huge amount – has changed in product management, and my own approach, since I wrote it.

I found myself describing to Martin Eriksson at his recent book launch some work I did at the UK’s Ministry of Justice on measuring product manager performance. So here’s an update to my original article from a real-life case study.

A bit of context #

Let me put this in context for you. When I wrote the original post about how to spot a good product manager, my experience up until that point had mostly been in the kind of companies that regarded product management as an evolution of project management – very process-driven. Gantt charts at dawn!

There, the product manager was meant to follow a waterfall process and attempt to make the user interface look like it hadn’t been designed by a database developer. (Even though it had.)

As a result my initial take on measuring how well a product manager is doing was against that backdrop.

Since then, I’ve learned a helluva lot from the dozens of different organisations I’ve worked with in the private and public sectors, many of which are embracing a more up-to-date approach to product delivery (i.e. user-centric, evidence-led, multi-disciplinary teams).

In the UK’s Ministry of Justice, I was Head of Product for their digital team, during which time I was responsible for 12 product managers of varying degrees of experience. Each product manager worked with her or his own multi-disciplinary delivery team (product management, research, design, development and delivery management).

Misguidedly, the senior management team was clinging on to their attempt to apply a command and control structure to a capable team of autonomous and intelligent people. Not the right approach at all. They had asked me to “stack rank” my product managers (assess their performance and put them in order from best to worst). There’s rarely any other reason for doing this other than a desire to reduce headcount by culling the worst performers.1

It didn’t appear to occur to them – though I pointed it out repeatedly – that this was frankly a terrible idea.

For starters, I knew that each person on my team was already a strong performer. Some of them had been in product management far longer that I had. Others were relatively new product managers, but even considering that were doing just fine, thanks.

Even if it was possible to assess all 12 product managers on a relative, linear scale normalised for their relative levels of experience, my team was perfectly capable of reading between the lines – they’d object so much to the stack rank exercise that they’d probably leave on principle. And I wouldn’t blame them for doing so, because who doesn’t love being devalued and treated as a commodity, right?

Between compliance and disobedience #

It was becoming clear that I couldn’t refuse to assess their performance outright. This would lead to my swift removal, then someone less protective of my team than me would simply pick an arbitrary metric, rank my team and fire a few of them. I could serve my team better by treading a fine line between compliance and overt disobedience. I would do some kind of performance assessment, but I’d structure it so that a stack rank was bloody hard to do.

This is what I came up with.

Start with the team #

First of all, I sat down with my team and talked through what was going on. I then surveyed them to establish what they felt were the most important soft (emotional) and hard (technical) skills a product manager needed. We used the top ten or so as the dimensions for their assessment. I also asked them how conversant they were with skills from other disciplines they frequently would interact with, such as research, design, content and development.

Then I got them to assess themselves individually. They gave themselves a score out of 5 based on how skilled they felt they were in each area. I then plotted the results for each individual on a polar chart, and compared that to the team average.

Immediately it was clear to see where the team felt it was stronger and weaker. After seeing the results, several of my team took the initiative to start filling in the gaps: one person buddied up with another product manager who was more experienced in Kanban, another put themselves forward to do more public speaking, and so on.

But the really interesting part was yet to come. I asked each of the delivery teams to rate (anonymously) their product manager on the same sets of skills. A product manager needs to be effective in their interactions with their multi-disciplinary team, so I was interested in their team’s subjective perceptions of their product manager. Were they good communicators? Did they inspire?

This exercise again yielded some interesting insights. In some areas the product manager’s self-assessment and their delivery team’s assessment were in agreement. In others, the product manager had rated themselves weaker in an area, while the team thought they were particularly strong – and vice versa. These findings were also worth exploring further.

The distance between us #

While this highlighted a failing of the senior management team in what was declaring itself to be a ‘flat organisation’ (yeah, right), it also was a point for improvement in the product managers. Given how reliant they were on having senior management’s support to keep things moving apace, clearly they needed to invest more time into stakeholder management.

So, what do I want you take away from this?

There is no single, absolute measure of performance – people have different strengths and weaknesses (and that’s okay)

You don’t want a homogeneous team – user problems are not all identical so you want a mixture of personalities, experience and abilities on your team to tackle them

I used Highcharts to render the charts. Each product manager had their own page – for their eyes only. Senior management only got to see the aggregated averages in case they got any big ideas.

I’ve got a live demo of the full report page available if you fancy taking a look. Needless to say, for this article the individual’s data has been anonymised (there was no product manager called Petra) and slightly randomised.

The two surveys that I used are here:

Similar versions of the self-assessment survey were also used for the product manager’s team and for senior management.

If you have any questions, pop them in the comments below.

8 Comments on “62: How to measure product manager performance”